Howdy-ho~ Hello~ Hello~ and welcome to my very first devlog for The Villatine: Sepia featuring my progress for the month! (progress, what progress?) So, as you may know, I'm from the Philippines, which makes today the end of September. Given that, I have to tell you guys what happened this month! Here's a chart for the short summary of what I've done so far: 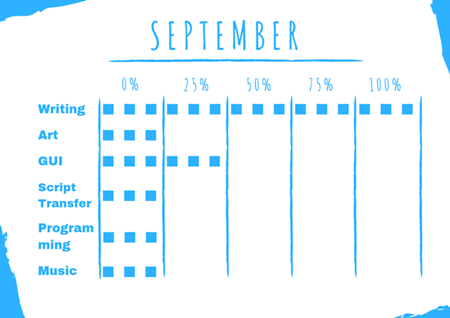 For this month, I focused on working on Chapter Two the most, although that's leaning more on the script. I dedicated at least two or more hours to work on the script and I'm so glad I finished it by the 28th. Here's my official word count (I told you that 5k will be the official word count but I don't know what happened. Anyways, it's not the final word count since I haven't transferred this to the script yet. This is basically just typed out somewhere so it contains some side notes and labels which adds to the word count.):

Even though I did finish it by the 28th, it didn't mean that I didn't struggle or have a case of Writer's Block here and there even though I was relatively writing in a free pace. I did solve the problem by reading shoujo mangas for some reason (here's what I read so far: Kimi to Wonderland, Bambi to Dhole, 24 Colors - Hatsukoi no Palette, and 360 Degree Material. Well, here's to me reading more if I can since it helps me to write stuff.) Anyways, here's the general outlook of what I've done.

Let me explain what's going on in this pic, the first two are for the first chapter. As you can see, I shall be replacing the Prologue once again. It will be divided into five parts and will be featured after every chapter's epilogue. The Prologue is quite grim so I decided to do it this way for now, it might change if I see how it affects the whole thing. And as you can see, there will be an epilogue per chapter although I'm still undecided whether it should be shown with or without a point requirement (like you only see the epilogue if you're going the right path to the true ending or something. It's an idea but I'm not sure if I should go with it just yet... advice? )

As for Chapter Two, if I'm going to compare it with Chapter One, it's longer than I expected it to be (Chapter One only has two parts). The reason is I've been following this outline I made and I can't get there without divulging into making three parts since there is at least three major stuff that happened per part. This chapter also gives more choices than the first one (and a few puzzles?). Anyways, that's about it writing-wise since I focused on doing that for this month.

For the art, I haven't done any art much at all. The only thing I did is the new main menu (I redraw it two times because I can't get used to digital drawing yet apparently, since I don't technically draw digitally everyday too so... still, I enjoy digital drawing and since it always takes me longer to draw, I listen to podcasts, specifically to the Homecoming podcast when I drew this main menu). Here's a sneak peek: 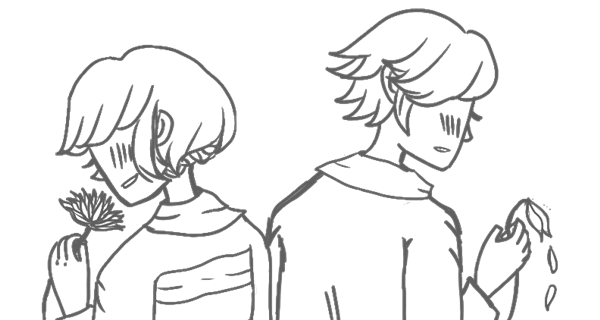 That's about it. Well so far, I might be done with the writing for Chapter Two but I'll still check it for things I can remove. Also, art-wise, I haven't started doing the art yet for this chapter but I don't know if I secretly want to torture myself because there's quite a lot of art again (The thing is I'm trying to eliminate making the character narrate what's going on in the story and control some time skips but I'll see what I can do and how I can lessen some stuff.) I might start working on the art next month as well. If not, then I'll just work on Chapter 3 so at least I can get all the story out of the way.

And so, thanks for reading this long rambling about what happened this month. See you, next month~ (If you're curious about the program I've been using for the writing, it's Quoll Writer, it's kind of like Scrivener, if you're familiar with that software. Anyways, I realized that I kind of ended up promoting a lot of things here, I hope you don't mind.)

To officially end this devlog, here's a fanart I received from Skyefrost: 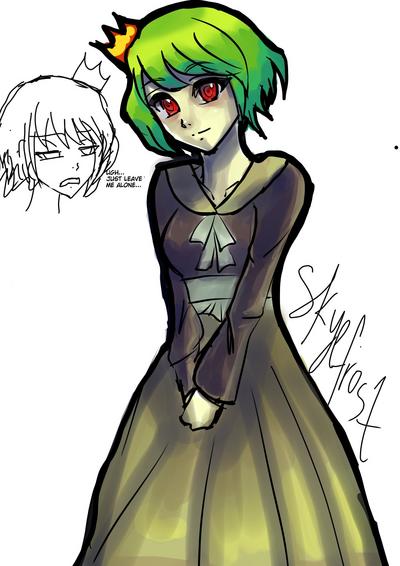